A tourist's guide to the best of the 15th arrondissement

Perfect for staying near the Palais de Sports, the 15th Arrondissement is the biggest neighbourhood in Paris and has plenty to see and do

The 15th Arrondissement is the largest arrondissement in Paris, and has a much more calm and open vibe going on. No space issues or constant sidewalk side stepping with other passerby here.

For tourists and other visitors, it’s off the beaten path so your neighbuors, more often than not, will all be locals. Because of that, you’ll feel truly immersed in Parisian culture.

It’s the only arrondissement without any monuments but it makes up for that with a nice selection of eateries, shops, churches, and event spaces.

Things to see and do near the Palais des Sports

The Palais des Sports, otherwise known as the Dôme of Paris, is an indoor arena. Originally built in 1959 to replace the previous sports complex arena, it has a capacity of 4,600. Depending on when you go, you’ll be able to catch different kinds of events going on. In the past, it has held Holiday on Ice shows, some Harlem Globetrotters’ basketball games, and concerts for artists like Bon Jovi, The Beatles, and Queen.

Fun for the whole family, Aquaboulevard is sure to keep the smiles on your little one’s faces - and you, too, since they’ll be busy splashing around in the water instead of making you feel stressed out. It’s one of the biggest waterparks in Europe, with both indoor and outdoor sections. It has two wave pools, 11 water slides, indoor and outdoor jacuzzis, lazy rivers, and a beach area. If you’re worried about safety, then they’ve got you covered with lifeguards on standby from opening to closing.

The Paris Expo Porte de Versailles is the largest exhibition space in France, spanning around 86 acres. It holds over 2,000 events a year and brings in millions of visitors. Different trade shows and events are held here, so it’s worth checking the Expo calendar to see if there’s a cool convention going on during your trip. Past events include the International Hobby Model Making Fair, Motor Show, and Paris Games Week.

What better way to keep your energy levels up while also taking a break than to eat some sweets at one of the bakeries in the area? Parisians love their pastries, so you should too. Try Des Gâteau & du Pain (“cakes and bread”), on the corner of Boulevard Pasteur and Rue Mizon. No frills in the decor department, but you’ll see why once you walk up the glass encasements.

Try one of their delectable and beautifully made treats, like their strawberry and gingerbread cakes. Prices can be as low as 6 € and rise depending on which one you get.

To get a view of the Eiffel Tower while also avoid the hordes of people on the Champs de Mars or Jardins de Trocadéro, then look no further than Pont Mirabeau and its surrounding area. Not many know about this gem, so you’ll be able to snap away without having too many photo-bombers in your picture.

Visit one of the many churches in the area

Paris has no shortage of churches and cathedrals, but here in the 15th arrondissement, it’s home to quite a few of its own. One of them, the Paroisse Saint Léon, is a church established in 1924 and dedicated to Pope Saint Leo I. During his papacy, Pope Leo was the “heresy killer” as he went after every heresy going on during his lifetime. He also established the principle of Jesus Christ being both fully human and fully God, asserted the authority of the papacy, and holding off a barbarian invasion in 425 AD.

How to get around:

You’ve got a ton of bus stops around you that make it easy to get around. Additionally, there’s also several metro stations that are served by the 8 and 12 lines.

Where to stay near the Palais des Sports

Rue Dulac
Sleeps 2
Area: Montparnasse
We love: colorful pop artwork decorating the walls and the mezzanine space.
Travel to the 15th Arrondissement, near Palais des Sports: Walk about 5 minutes to the Volontaires metro station. Take the 12 line for three stops until you reach the Porte de Versailles stop.

A Feng Shui Cocoon
Sleeps 2
Area: around the Eiffel Tower
We love: exposed wooden beams in the living, the eccentric takes on modern appliances, and the abundance of reading material.
Travel to the 15th Arrondissement, near Palais des Sports: You have a few options here but only two are on the shorter side. The first is to walk about 5 minutes to the bus stop at Bosquet Saint-Dominique and then take the 80 bus for 22 minutes until you reach Porte de Versailles. The second is to walk 5 minutes to the La Tour-Maubourg metro station and take the 8 line for 7 stops until you reach the Balard stop.

We love: the French Revolution style with hints of eastern culture interior design, beautiful antiques, and the yellow dining room.

Travel to the 15th Arrondissement, near Palais des Sports: Walk about 10 minutes until the

Falguière metro station and take the 12 line for five stops until you reach Porte de Versailles.

We love: the view of ivy covered walls outside the french windows, the breakfast bar, and the contemporary feeling.

Travel to the 15th Arrondissement, near Palais des Sports: Walk right around the corner to the Michel-Ange - Auteuil bus stop and take the 62 bus for 15 minutes until you reach the Félix Faure stop.

Area: around the Eiffel Tower

We love: the view of the Eiffel Tower, the outdoor balcony that you can actually step out onto, and the stainless steel open kitchen.

Travel to the 15th Arrondissement, near Palais des Sports: Walk for about 7 minutes to the Passy metro station. Take the 6 line for six stops to the Pasteur stop, then transfer over to the 12 line and take it for four stops until you reach Porte de Versailles.

Dream Apartments to rent in the 15th 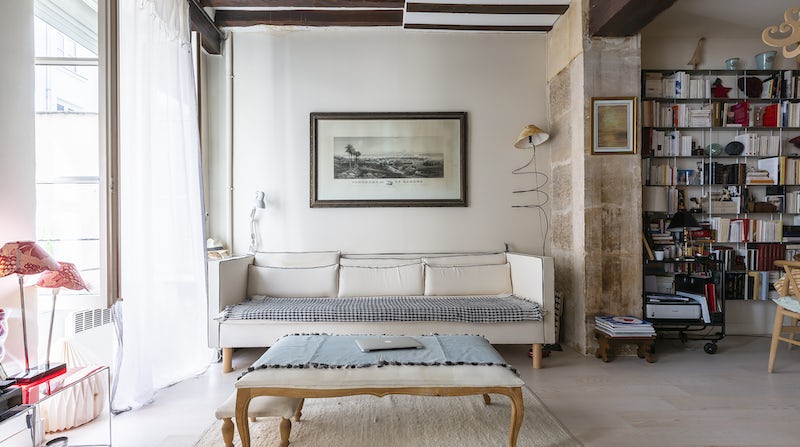 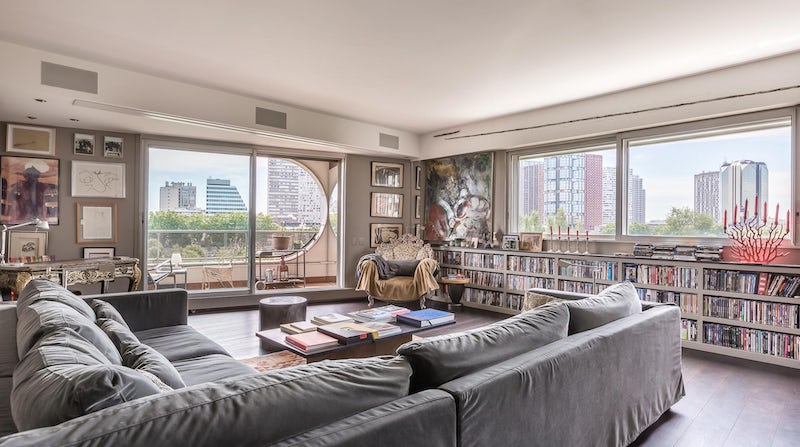 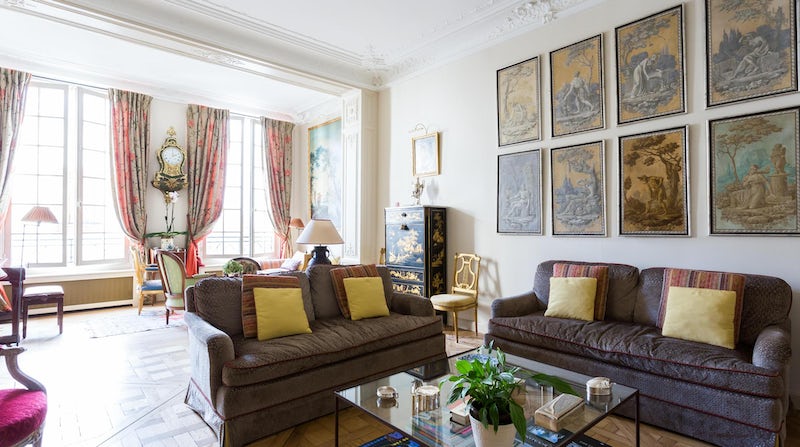 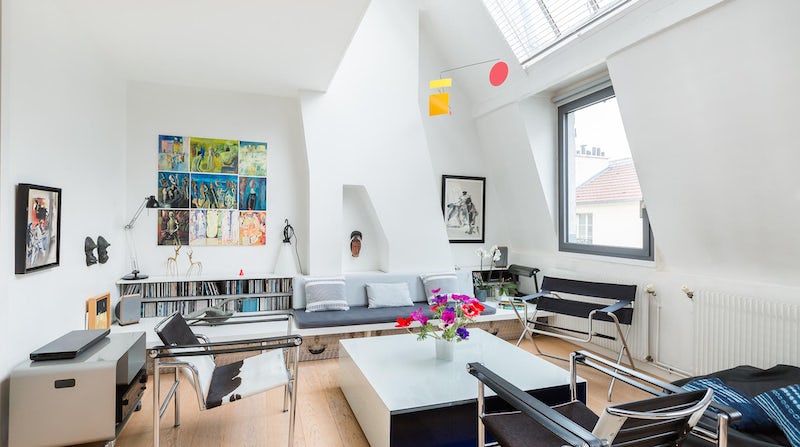 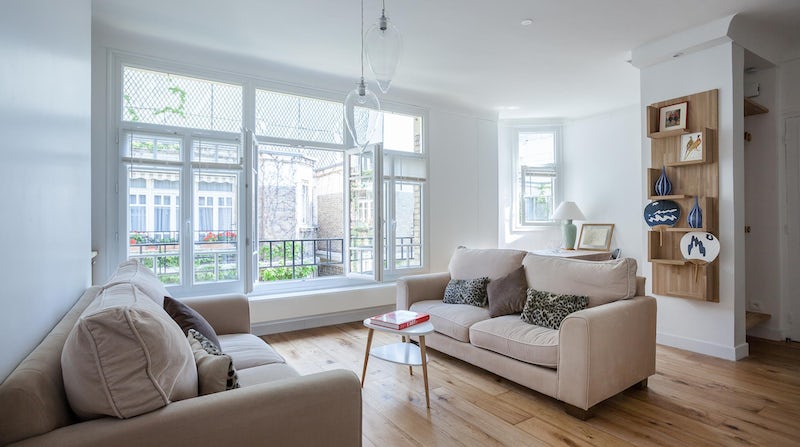