A Guide to the Best Art Galleries in Paris

Paris is one of the art capitals of the world, and we've compiled a list of unmissable galleries for you

When it comes to art few cities in the world have as much to offer as Paris. It’s wildly exciting, but with so much on offer, the choice can be overwhelming. It’s worth spending a bit of time looking into what’s what and narrowing it down a bit before you get going. After all, even the most enthusiastic art lover in the world couldn’t cover it all in one trip.

The Paris Pass – what you need to know

First things first though, the Paris Pass is a comprehensive sightseeing package that’ll make your trip so much easier. It will save you time, money and stress on expensive entrance fees. It includes useful perks like free entry to certain attractions, fast-track entry that’s great for skipping queues at some of the busiest museums, free bus tours and a guidebook. It also comes with a handy mobile App. You can get a pass for a 2, 3,4 or 6-day trip. You can buy the pass online from the Paris Pass website.

The great thing about many galleries in Paris is that they have at least one, if not two late openings a week, which is incredibly useful if you are on a short trip or if you value the opportunity to peruse their collections in a slightly more peaceful environment.

Here are a few suggestions to help you on your way.

Standing on the right bank, just north of the western tip of the Île de la Cité, is the Louvre, one of the world’s largest palaces and world’s most visited museums. It holds a collection that spans French artwork from ancient civilizations to the mid-19th century. Famous for being the home of Leonardo da Vinci’s Mona Lisa, it has many masterpieces by Italian Renaissance painters and Flemish and Dutch painters of the Baroque period.

It also has departments of decorative arts, Greek, Etruscan, and Roman antiquities, Egyptian antiquities, and near eastern antiquities, which hold so many treasures you could spend your day exploring these alone. Queues for the Louvre are very, very, long, so it is worth buying your ticket in advance.

From the Louvre, it’s just a short stroll to the west corner of the Tuileries Gardens, next to the Place de la Concorde, to the gates of the Orangerie, where you can lose yourself in the murals of two elliptically shaped rooms showcasing Monet’s eight water lily canvases. Considered one of the largest monumental achievements of early twentieth-century painting, these murals are a bit of a must-see.

The Orangerie also boasts a very large collection of works by world-renowned impressionist and post-impressionist painters, including Cezanne, Matisse, Modigliani, Picasso, Utrillo, and more. Tucked away in the basement you will find the Jean Walter and Paul Guillaume Collection of impressionist and Ecole de Paris paintings, which include works by Matisse, Renoir, Derain, Rousseau and Soutine.

If you just can’t get enough of the Impressionists, then make your way across to the left bank of the Seine where you’ll find the Musée d’Orsay. The museum holds mainly French art dating from 1848 to 1914, including paintings, sculptures, furniture, and photography. It also houses the largest collection of impressionist and post-impressionist masterpieces in the world. Once a train station, the platforms became too short for use in the 1900s and the building was converted. The fifth floor features a famous clock, through which you can admire a view of Paris.

The Pompidou Centre is home to the Musée National d’Art Moderne de Creation Industrielle. Now that’s a mouthful! We’ll forgive it though because it houses Europe’s leading collection of modern and contemporary art, with over 100,000 works from all over the world, dating from 1905 to the present day, and including works from Giorgio de Chirico, René Magritte, Piet Mondrian (yes, those geometric red, yellow and blue squares your neighbours have modelled their new kitchen on), Jackson Pollock, Joseph Beuys, Andy Warhol, Yves Klein and so, so many more!

As well as the chance to admire more contemporary artworks than you can shake a stick at, the museum also has industrial creation and architecture and design collections. Contents aside, the building itself, designed by world-renowned architects Renzo Piano and Richard Rogers, is worth a once-over.

The Lap of Luxury

The Palais de Tokyo, in the 16th arrondissement, is absolutely massive and home to more than one museum -  the Musée d’Art Moderne de la Ville de Paris (city of Paris’ museum of modern art) in the east wing, and the Site de Création Contemporaine (site of contemporary creation), in the west wing. Exhibitions highlight the European and international art scenes of the 20th century, as well as displaying monographic and thematic exhibitions of trends in today's art. The museum of modern art is dedicated to the art of the 20th and 21st centuries. The west wing is dedicated to temporary exhibitions of contemporary art that run every six weeks.

Off the beaten track – independents art galleries in Paris

If you’re after something a little more cutting-edge, Paris is home to a significant number of high-calibre independent galleries. Here are a few to get you started…

On Boulevard Raspail in the 14th arrondissement, in a fabulous glass building designed by French architect Jean Nouvel, and surrounded by gardens created by artist Lothar Baumgarten, the foundation hosts major contemporary art exhibitions, both themed and specially commissioned, in a variety of media, as well as special events known as Soirées Nomades (Nomadic Nights).

Founded in 2002, the gallery occupies a former 1930s’ garage in a free-hold industrial building in the 19th, and represents French and international emerging and established artists. The gallery is open to the public from Tuesday to Saturday. C’est très chic.

In the heart of Saint-Germain Des-Prés, in La Vieuville mansion which dates from the 17th century, you can peruse artwork by emerging artists, as well as major exhibitions from prominent international painters, including Anish Kapoor, Lee Ufan and Daniel Buren. It also has a second gallery space just two blocks away which makes it doubly worth the trip.

With three spaces in Le Marais, this super-trendy independent gallery exhibits the works of an impressive line-up of leading contemporary artists. You can expect to see names such as Takashi Murakami, Sophie Calle and Pierre Soulages on the wall plaques. If you’ve never heard of any of these, then it’s probably worth popping in.

If you’re interested in seeing 700 works by young, up and coming, and mostly French artists, you should check out frac île-de-France (Regional Fund for Contemporary Art of the Ile-de-France region) in the Plateau, north-west Paris.

Like any self-respecting city, Paris has a strong street-art scene and when I say street art, I am not talking about your bog-standard run-of-the-mill graffiti. The great thing about exploring street art is that you get to be outdoors.

Unsurprisingly much of the city’s street art is to be found adorning the walls of the less central arrondissements, but it’s worth kicking off our exploration with a nod to the Lasco project at the Palais de Tokyo, which has been inviting street artists to adorn the walls of its subterranean passages since 2012.

Also, Jef Aérosol's iconic 1980s’ ‘Chut’ can be admired just across from the Centre Pompidou. This, amongst others, forms the heart of the 1980s’ street art movement.

Palaces aside, much of the best street art that Paris has to offer can be found in the Belleville neighbourhood, which spans the 11th – 20th arrondissements. You can begin your exploration along the 2km-long stretch of the Rue Saint-Maur in the 11th arrondissement.

The Rue Saint-Maur intersects with the Rue Oberkampf where you’ll find Le Mur (The Wall) – a project commissioned by the French Street Art Association, inviting artists from around the world to paint murals which are displayed for two weeks at a time. You can watch new artists at work on the 2nd and 4th Saturday of every month.

Following the work supported by the #Parismursmurs project around the city will lead you to the work of well-established artist Olivier “2shy” in the 3rd arrondissement.

For the adventurous, the Rue Saint Laurence in the 20th arrondissement is worth a visit, as is the Boulevard de Villette which features a massive modern fresco by Parisian artist Yann Lazoo overlooking a community garden. Lazoo has exhibited works internationally.

On a bridge over the railway tracks leading in and out of Gare du Nord, linking the 18th and 19th arrondissements, you’ll find a 497m-long wall full of art, created in December 2015 in honour of the life and achievements of civil rights activist, Rosa Parks.

And finally, nestled in the 20th arrondissement is the Rue de Cascades, where you will find an impressive Van Gogh inspired mural by Australian born artist, James Cochrane.

And don’t forget the sculpture!

One cannot talk about the Parisian art scene without at least mentioning it’s wealth of sculpture. If you have time to wander through the beautiful palace gardens at the Jardin de Luxembourg, you will come upon dozens of sculptures by France’s most famous, dating back to the 16th century.

And then there’s the Musée National Rodin, in the Hôtel Particulier, the mansion where Rodin lived at the end of his life. It now contains an unrivalled collection of the sculptor’s work. The Kiss, the Cathedral, the Walking Man, portrait busts and early terracottas are exhibited indoors, as are many of the individual figures or small groups that also appear on the Gates of Hell. The walls are hung with paintings by Van Gogh, Monet, Renoir, Carrière and Rodin himself.

Luxury Apartments to rent Near Art galleries in Paris 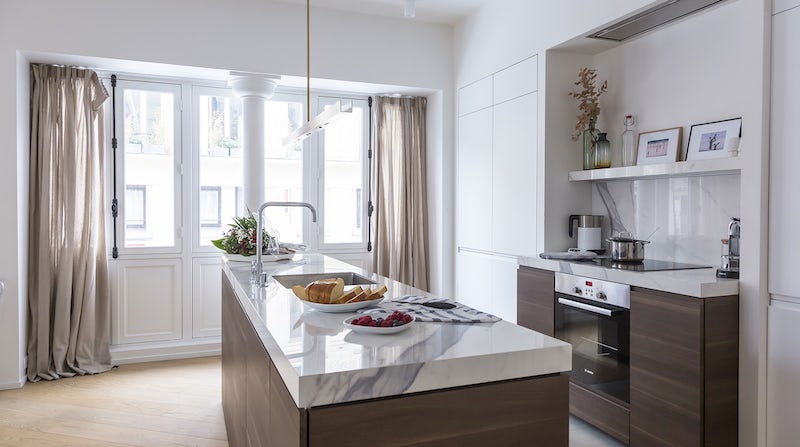 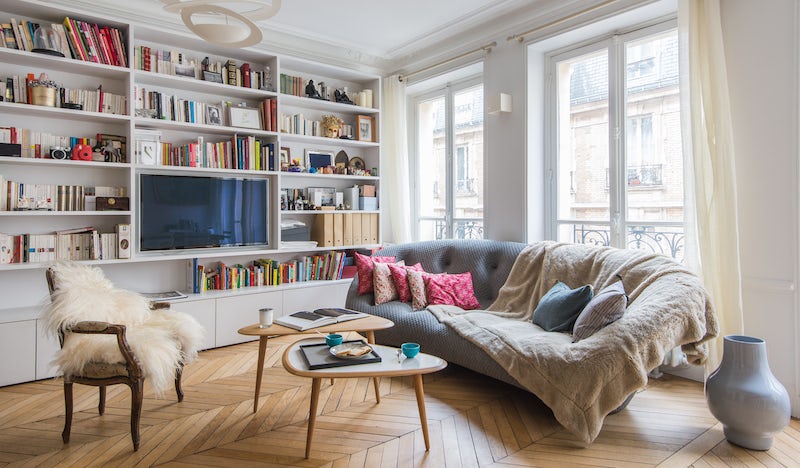 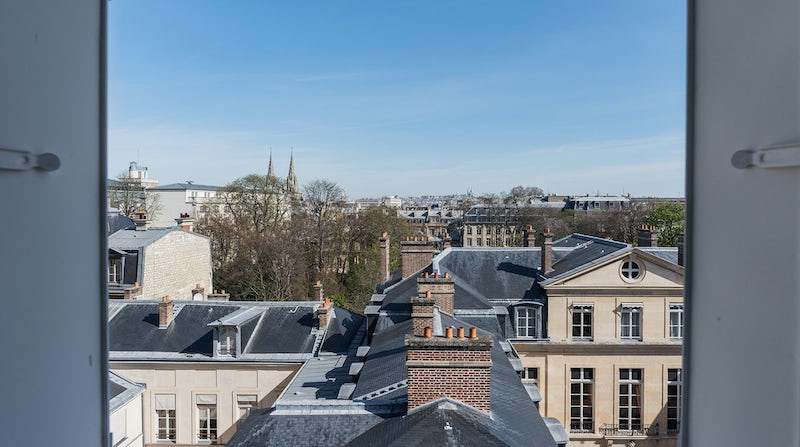 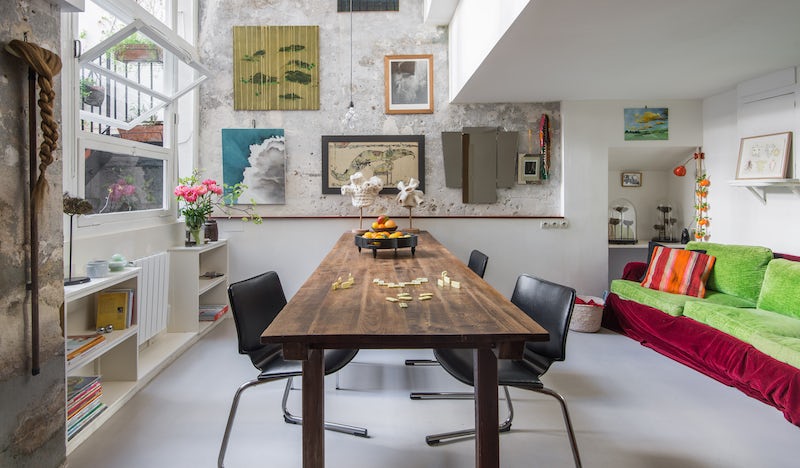 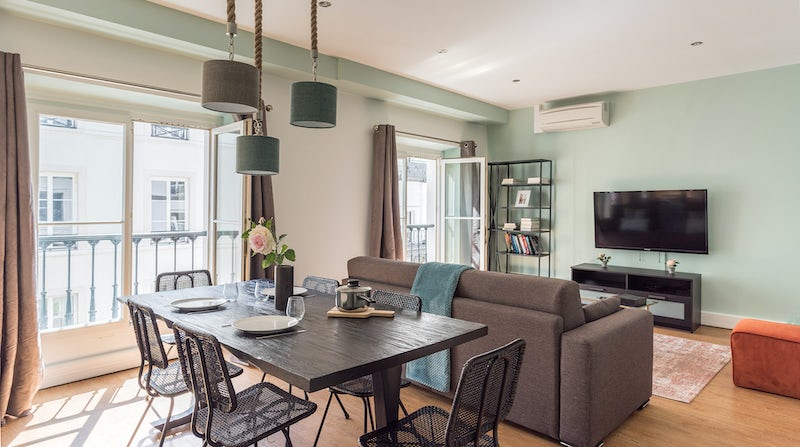 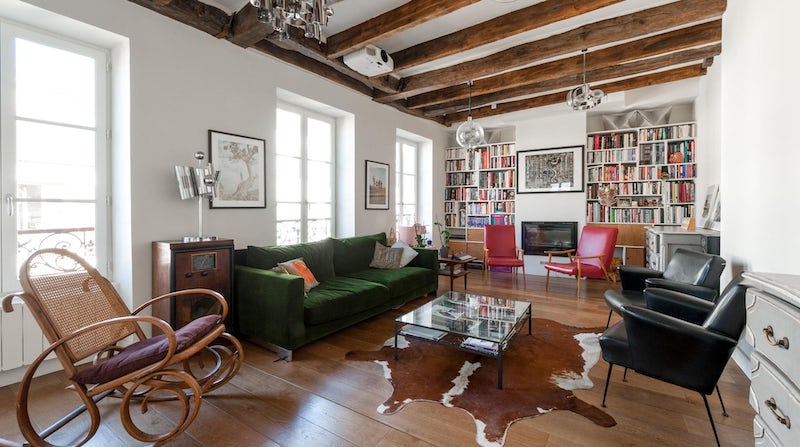