The Paris Neighbourhood Guide for first time visitors and tourists

If you’re a tourist or a first time visitor to Paris, this ultimate guide to the districts will have you moving around like a local in no time.

Nietzsche said “An artist has no home in Europe except in Paris", and while the city has a reputation for arts and culture, each of the arrondissements has its own distinct personality.

Paris is divided into 20 districts known as arrondissements. Each arrondissement is split into four quarters, though the quarters are rarely referenced in regards to where you live or are staying.

If you're looking into visiting Paris for the first time, don't fret! We've got you covered by providing a brief and handy guide to every district in La Ville Lumiére.

Paris's first arrondissement is the centre of the city. The Louvre, Tuileries, Place Vendôme, and the Palais Royal are all located there. As well as a lot of tourists. But is it worth the stay? If Rue Saint-Honoré's upscale boutiques have anything to say? Absolutely.

Highlight: Put your feet up by one of the fountains in Jardin des Tuileries and watch the world go by or browse the couturiers as you wander around the portico of the Palais Royal.

North of the 1st arrondissement is one of the city's smallest. This is Paris's premier business district and a hub for Internet start-ups, earning it the nickname 'Silicon Sentier'. It is also a hidden gem for shopping experiences.

Highlight: Rue Montorgueil is a shopper and a foodie's delight. As you walk down it, you'll feel like you're in the center of a film.

Both areas of the Marais have a very different feel to them. The streets of the relatively ungentrified 3rd are lined with 17th-century mansions. These homes once belonged to the Parisian elite and the noblest families in the city.

Unlike its neighbour, the 4th arrondissement is the city's heartbeat. A haven for the nightlife, if you enjoy the lively, the trendy, and the artistic, The Marais is the neighbourhood for you.

Take a book to Place des Vosges on a warm Spring afternoon and be inspired.

The Latin Quarter is where the Panthéon sits and has, for many years, been a centre for study. Plenty of trendy brasseries and boutique hotels line Rue Mouffetard in all of its old-world-charm but caters especially to the younger crowds.

Highlight: Jardin des Plantes is the main botanical garden in the whole of France and it shows.

What can only be described as the embodiment of the left bank, this iconic neighbourhood is the most expensive in Paris and it shows. Once a hangout for creative intellectuals, it now belongs to the bourgeoisie.

Highlight: Wake up early to see the Medici Fountain in the Jardin du Luxembourg in all of its glory. Citypharma, a visitor's best friend, is also just streets away.

Staying within this picturesque, wealthy district can be akin to a sleepy hamlet. Luckily, there is much more to it than the Eiffel Tower and the Musée d'Orsay. (We should also mention Karl Lagerfeld lives here, because why wouldn't he?)

Highlight: You've seen the Louvre and d'Orsay, but the newest of the city's great museums is Musée du Quai Branly that houses a vast selection of tribal art.

When you think of the classic Parisian style of dress and wonder where it comes from, the 8th is the answer to your question. Chic, expensive, and oh-so-French, it's home to most designers you can name.

Highlight: Montaigne Market is full of luxury and designer fashion that will set your world alight.

Centrally located, the 9th arrondissement is a lively mix of business to the south and fun to the north. This diversely residential area is a hit for much of the artistic crowd.

Highlight: Take in a ballet at the Opéra Garnier or one of the popular concerts at the Olympia.

During the summer, native Parisians and tourists alike line the sides of the canal with food, books, and cigarettes. The area around Canal Saint-Martin is multi-cultural and bohemian and has some amazing restaurants and record shops hidden away in its lanes.

Highlight: Take some time out of your day to sit by Canal Saint-Martin with the locals or visit the bridge from which Amélie skimmed her stones. Because when in Paris...

Somewhere between the Marais and Belleville, the 11th arrondissement is one of our favourite spots. Primarily known as being a residential area for artists of all ages, if you're wanting to disappear into the Parisian world, Rue Oberkampf is a good place to start.

Highlight: Book a slot to see Musée Edith Piaf, a private museum based in the fourth-floor apartment where the chanteuse used to live.

Bercy is a residential district and one of the safest areas in the city. Known for its connections to every other part of the city. Here you'll find great value for money and the Promenade Plantée - a magical, elevated greenbelt spanning the three miles from Bastille to Bois de Vincennes.

Highlight: As well as the greenery of the Promenade Plantée, Bercy Village brings a taste of the French countryside to the city of lights.

The modernist Place d'Italie is one of France's most ambitious urban renewal projects. This residential district doesn't so much capture the romantic Paris you read about in books, but it has its charms. The 13th is a mix of towering high rises and the cobblestone streets of the Butte aux Cailles.

Highlight: The Batofar was the beginning of the Parisian nightclub-on-a-boat trends. The difference here is she also functions as a restaurant during the day.

Montparnasse gets a bad rep for how quiet it can be, but for the recluse who needs a moment to themselves after a hard day of Paris, it's perfect. A quiet residential neighborhood, Montparnasse has creperies and brasseries for days as well as the Cité Universitaire.

Highlight: Cimetière du Montparnasse is the resting place of plenty of intellectuals. Sartre and de Beauvoir, Man Ray, and Susan Sontag are all placed there. Carve out your afternoon to walk among the greats.

Another residential neighbourhood that's mistaken for its dullness, the 15th borders the 7th. This means you're within easy walking distance of the plush restaurants and locations around the Eiffel Tower, and you won't have to deal with the bustle.

Highlight: Learn Yoga and Ayurvedic techniques at Tapovan or simply go there to get a massage and relax.

Home to many expats who have relocated to Paris, Passy is primarily known for being a neighbourhood for the upper class. A safe and quiet area for families, it's also a stone's throw from Paris's best. The Arc du Triomph and the Place du Trocadéro's iconic view of the Eiffel Tower are accessible within minutes.

Highlight: Carve out an afternoon in the Palais du Tokyo, grab a drink and take in the latest in contemporary art exhibitions.

Batignolles is an up-and-coming area for créateurs and the bohemian-bourgeois (affectionately known as bobos). The 17th is close to the Parc Monceau and is full of cafés, galleries, and places to simply create. Providing a great alternative to its neighbouring Montmartre, this untouched part of Paris is still in its glorious infancy.

Highlight: Marché Poncelet is a classic Parisian street market that is a treasure trove of gastronomic proportions.

Montmartre is the village of artists and history. It maintains all of the magic you've seen on screen in films like Amélie. Truly a living postcard of a dreamlike Paris, it's ideal for couples and friends who are chasing their Parisien dreams.

Highlight: Picasso and Modigliani - amongst plenty of other artists - roamed these streets. Au Lapin Agile is a cabaret that's open to this day.

The 19th arrondissement is a peaceful, green, and family-friendly area to the north of the city. It's a nice place to get out of the way, to avoid fatigue. Its streets are undeniably Paris, yet there is something more to it: something calm.

Highlight: Old fishermen set themselves up along the edges of the Bassin de la Villette, but the true highlight is the Buttes-Chaumont which provides one of the best sunsets in Paris.

What was and still is the most working-class district in Paris, Belleville isn't for everyone. For those who are after more off-the-beaten-track creative experiences, however, these graffiti-coated streets are a testament to their city. Belleville is tenacious. It's where Edith Piaf was born and raised, after all.

Highlight: Music lovers should find their feet in La Maroquinerie, one of the most happening music venues in Paris. A visit to the Aux Folies during winter won't go amiss, either. 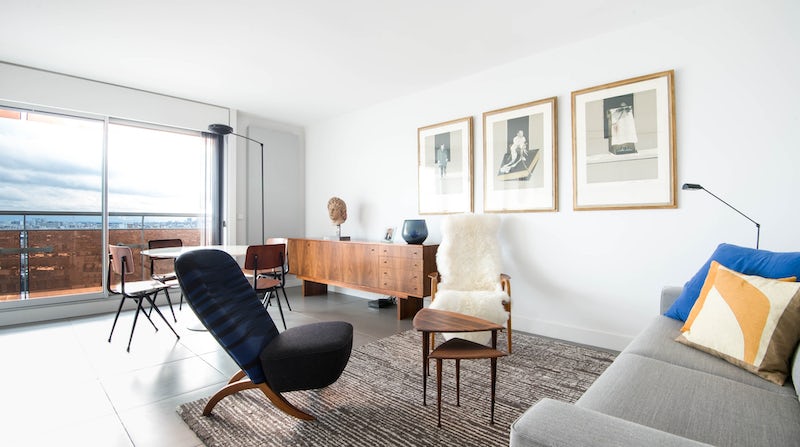